As I was casually reading along in the Book of Mormon, minding my own business, I ran across a sentence I had not noticed before about Zion.  It’s in 2 Nephi, chapter 1 where Lehi is admonishing his sons just before his passing.

These phrases remind us of the Lord’s definition of Zion found in Moses 7:18 (reformated here for clarity):

“And the Lord called his people Zion, because:
(1) they were of one heart and one mind,
(2) and dwelt in righteousness;
(3) and there was no poor among them.”

It seems clear that “be determined in one mind and in one heart”, matches the first element of a Zion society above.  And, in encouraging his posterity to be “united in all things” it could be that Lehi meant that “there [should be] no poor among them”.  Lehi was perhaps admonishing his sons to live a Zion lifestyle, to be of “one heart and one mind” and “united in all things” (ie. both spiritually and temporally).

Not only that but then Lehi makes it clear that living in Zion would prevent them from sliding into captivity and destruction.  He continues:

How about that!  Those are some of the very same results I discovered are the societal consequences resulting from what I’ve named, “The Pride Flu”.  The Pride Flu is when a society becomes pride-based where relationships, commerce, religion, government, and morals are all corrupted by pride (ie. “I’m more important than you because I have more ____ than you do”).  A scriptural term for this type of society is “Babylon”.

As you can read in my previous posts here and here, by finding numerous accounts and sermons in the Book of Mormon, I discovered that the long-term consequences of developing a pride-based society are:

Notice that Lehi specifically mentions two of the four as he warns his sons to live Zion values.  He mentions captivity and destruction as the long-term, societal-level consequences of not living a Zion lifestyle. But he also, perhaps, was referring to famine when he stated, “That ye may not be cursed with a sore cursing”. I say this because there is another scripture mentioning a “sore cursing” which also refers to famine (or at least, drought):

Moses 8:4 And there came forth a great famine into the land, and the Lord cursed the earth with a sore curse, and many of the inhabitants thereof died.

This all makes me wonder if Lehi had established a Zion society with those who had arrived with him in the New World, or, at least tried to do so.  If Lehi was encouraging his sons to maintain their Zion society, then there might be evidence of economic unity and purity of heart in the record.  Is there any such evidence? 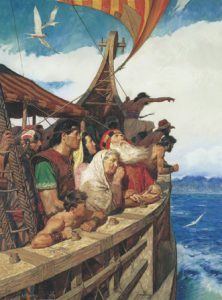 Yes, at least among the first Nephites.

In his angel-inspired sermon recorded in Jacob 2, Nephi’s younger brother, Jacob, calls out some of his fellow Nephites who abandoned the “all things common” element of a Zion society and rakes them over the coals for being prideful about it.

The background was that some of the Nephites had gotten into mining precious metals.  This is no problem in a Zion society, assuming they bring back what they find and share it.  But that’s not what they did.  They apparently used their new-found wealth to pay people to make “costly apparel” for them.  Even worse than that, they began seeing themselves as above those having less abundance than they and began persecuting them for it.

Here’s how Jacob reports it:

12 And now behold, my brethren, this is the word which I declare unto you, that many of you have begun to search for gold, and for silver, and for all manner of precious ores, in the which this land, which is a land of promise unto you and to your seed, doth abound most plentifully.

13 And the hand of providence hath smiled upon you most pleasingly, that you have obtained many riches; and because some of you have obtained more abundantly than that of your brethren ye are lifted up in the pride of your hearts, and wear stiff necks and high heads because of the costliness of your apparel, and persecute your brethren because ye suppose that ye are better than they.

The Lord, through Jacob, uses some pretty harsh words to describe these Nephite miners’ actions.  He says, “O that he would rid you from this iniquity and abomination.”

In verses 14 & 16, Jacob warns of the ultimate consequences of their actions:

“…if ye persist in these things [God’s] judgments must speedily come unto you.”

“…let not this pride of your hearts destroy your souls!”

Jacob’s familiar admonition for righteous behavior to these errant Nephite miners has a definite Zion ring to it when reading it in this context:

17 Think of your brethren like unto yourselves, and be familiar with all and free with your substance, that they may be rich like unto you.

18 But before ye seek for riches, seek ye for the kingdom of God.

19 And after ye have obtained a hope in Christ ye shall obtain riches, if ye seek them; and ye will seek them for the intent to do good—to clothe the naked, and to feed the hungry, and to liberate the captive, and administer relief to the sick and the afflicted.

These verses contain a decidedly un-Babylon-like economic worldview.  Wealth is not to be pursued for personal benefit only, but to benefit everyone in the community, especially those less capable of economic productivity.  Zion is not a me-centered economy, but a we-centered economy.

There doesn’t seem to be any evidence that the early Nephite society made progress towards a full-blown, Enoch-style, Zion society. In fact, it appears from the record that the prophets were lucky to hold Nephite society together and prevent its destruction.

And the people were a stiffnecked people, hard to understand.

And there was nothing save it was exceeding harshness, preaching and prophesying of wars, and contentions, and destructions, and continually reminding them of death, and the duration of eternity, and the judgments and the power of God, and all these things—stirring them up continually to keep them in the fear of the Lord. I say there was nothing short of these things, and exceedingly great plainness of speech, would keep them from going down speedily to destruction.  (Enos 1:22-23)

Behold, it is expedient that much should be done among this people, because of the hardness of their hearts, and the deafness of their ears, and the blindness of their minds, and the stiffness of their necks; nevertheless, God is exceedingly merciful unto them, and has not as yet swept them off from the face of the land. (Jarom 1:3).

Jarom’s son Omni then reported that he was “a wicked man, and I have not kept the statutes and the commandments of the Lord as I ought to have done.”  Omni’s son Amaron reported that “the Lord did visit [the Nephites] in great judgment” and that “the more wicked part of the Nephites were destroyed”.

So, clearly, if Lehi had attempted to establish a Zion society among his children, that flame blew out within a few generations.

The hundreds of quotes shared on this blog show how dedicated our early latter-day prophets were to “building Zion”.  Yet we Latter-Day Saints (at least those in the USA) are fully engaged and entangled in the me-economy of Babylon.

We could be making efforts to follow Lehi’s counsel to “be determined in one mind and in one heart, united in all things, that ye may not come down into captivity“.  Are we going to continue our focus on living in a me-focused economy and follow the Nephites down to destruction?  Or, will we overcome our pride and work together to create (or, at least, move towards) an enduring Zion society?  The choice is ours.

I choose Zion. And, I invite all who want to enjoy the society God wants for us to work together to move in that direction.  My Stake President offers a Zion-building plan that is focused on spiritual preparations.  I offer a plan for taking baby steps towards building the economic side of Zion here:  ZionBuilders.org