The vision of building Zion was established by the Lord, through Joseph Smith, the founder of the Church of Jesus Christ of Latter-Day Saints. Joseph attempted to establish it, but the Saints proved they weren’t ready. Brigham Young moved the Saints West to build Zion “in the mountains of Israel“. 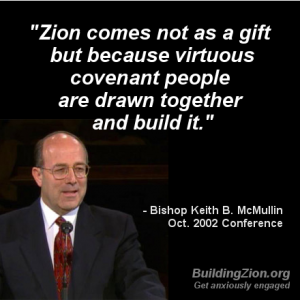 For forty years the Brethren made grand and noble efforts in building Zion in Utah. They not only taught that building Zion is God’s will, but that the Saints were obligated to build Zion. They also taught that their efforts were a direct fulfillment of ancient prophesies about Zion in the latter days.

The Stepping Stone to Zion

Decade after decade, the LDS leaders taught the Saints the necessity of economic independence. In addition, they tried numerous economic experiments attempting to encourage economic unity among the Saints. They established cooperative enterprises as a stepping stone to the Lord’s full Law of Consecration & Stewardship.

Sadly, the Saints in Territorial Utah proved yet again that they weren’t ready to live Zion’s United Order. Most of the four kinds of United Orders set up by “Brother Brigham” failed within their first year. A few, like the famous Orderville, lasted for years.

However, Young’s successor, John Taylor, wisely saw that going back to creating cooperatives was better than just defaulting to the Telestial economics of their American neighbors. So he created “Zion Central Board of Trade” with a local board of trade in every Mormon settlement. A local historian at the time said he thought John Taylor would have considered the Board of Trade as his “greatest achievement”.

In spite of their setbacks, the Saints were making great progress in building a society where cooperation and self-reliance were the rule of the day. Unfortunately, the cooperatives, the surviving United Orders, and the Zion’s Central Boards of Trade were all shut down by the US Government’s enforcement in the late 1880s of the Edmunds Anti-Polygamy law. The Church’s program of encouraging economic unity and local self-reliance came to an abrupt end.

God Hasn’t Given Up on Zion

But the prophesies about Zion in the last days haven’t gone away. As the Lord himself said, “What I the Lord have spoken, I have spoken, and I excuse not myself; and though the heavens and the earth pass away, my word shall not pass away, but shall all be fulfilled….” In fact, the Book of Mormon promises special blessings to those who “who shall seek to bring forth my Zion at that day” (1 Nephi 13:37). Besides, according to Moses 7:62 at least one city of Zion must be built before Christ returns – the New Jerusalem.

It seems ludicrous to me to think that the Lord will call those who have never given establishing Zion much thought or effort to do the actual building when that time comes.  Also, it seems unlikely that those who are ignorantly living in Babylon, Zion’s opposite, would be able to overcome the culture shock when it comes time to build Zion.  As Elder David R. Stone explained in his enlightening talk, “Zion in the Midst of Babylon“, we absorb Babylon’s values through daily participation in her social systems.  So open awareness of the difference between Zion and it’s opposite, Babylon, I believe is crucial to fleeing the latter, and building the former.

My challenge to all of us is that we get “anxiously engaged” in the good cause of preparing ourselves both spiritually and temporally to be able to assist in building the official Zion. That will occur when the Lord sees fit to instruct his prophet. If we insist on waiting to be “compelled in all things” Zion, we shall be as the five foolish virgins.

Not convinced? Read on. This site has hundreds of quotes about building Zion from LDS apostles and prophets which make our obligations clear. If you are convinced, and want to help, visit Zion Builders.org.

I am aware that some Elders who go forth and preach long and pious sermons, frequently represent Zion as one of the most delightsome places in the world, as if the people in Salt Lake City were so pure and holy that the flame of sanctity would almost singe the hair off a common man’s […]

The commandment has gone forth for the Saints to gather and build up Zion. – Brigham Young, 9/2/1860

“It now remains with us to bear off this kingdom, build up Zion, and establish the law thereof, until Christ shall reign King of nations….” – President Brigham Young, 6/7/1853 In other words, until Christ returns, our job is to prepare by building up His kingdom [which is spiritual] and building Zion [which is temporal]. […]

“…for if we are to build up the kingdom of God, or establish Zion upon the earth, we have to labor with our hands, plan with our minds, and devise ways and means to accomplish that object.” – President Brigham Young, 7/13/1855

” I do not expect to be with you forever, neither will brother Brigham in these bodies; they are nearly worn out; they have stood a long and violent siege and will soon go the way of all the earth. Still we may live many years yet to assist in making permanent the foundations of […]

We Can’t Coast into Zion “Sitting on a Hemlock Slab”

Yesterday morning I was continuing my on-going search through all the talks given during the Territorial Utah years by LDS General Authorities that mention Zion. As I go through them, nearly every mention of Zion falls neatly into about a dozen general idea categories. So, I ran across a talk by Wilford Woodruff given in […]

“You were annoyed with the ungodly conversation and filthy deeds of your neighbors, your peace was destroyed, and you could not enjoy that happiness held out to you in the Gospel; yet you felt the influence of the spirit of truth burning in your heart, which kindled in you a longing desire to mingle with […]

“That is our errand in the world, and we have no business but to build up the kingdom of God, and preserve it and ourselves in it. Whether it is ploughing, sowing, harvesting, building, going into the canyons, or whatever it is we do, it is all within the pale of the kingdom of God, […]

Jesse Building Zion is God's Will 0

“If I lay down the Book of Mormon, I shall have to deny that Joseph is a Prophet; and if I lay down the doctrine and cease to preach the gathering of Israel and the building up of Zion, I must lay down the Bible; and consequently, I might as well go home as undertake […]

But we are here in a school to learn, and it is for the Elders of Israel who are desirous to do the will of God, and keep His commandments, …to seek to the Lord for His guidance and direction, …and to seek to build up the Zion of God and the kingdom of God […]

Jesse We Are Obligated to Build Zion 0 John Taylor

I fully realize what Elder Woodruff said this morning concerning the aged Elders of Israel passing away, and that the responsibility and labor of bearing off this kingdom will soon rest upon the generation which is growing up in our midst, upon which will devolve the work of carrying the Gospel to those who have […]

It is for us all to take a course that we may secure the favor and approbation of the Almighty, that we individually may be led by him, having his spirit always with us. Then if the Presidency be under the guidance of the Almighty, and God direct the Priesthood through them in all its […]

This is what we are gathered here for—to build up the Zion of our God, to establish the Kingdom of God, and to purify and exalt the Church of the living God. – John Taylor, 2/10/1884

The Latter-day Saints cannot stand still; we cannot become stereotyped. God has decreed that his Zion must progress. We cannot remain in one groove or position. This kingdom has continued to progress from the beginning, and the little one is now more than a thousand, and it will hasten to become a strong nation, for […]

Jesse We Are Obligated to Build Zion 0 Wilford Woodruff

We have a great deal to do to destroy wickedness and establish righteousness upon the earth, and to prepare ourselves for the establishment of Zion, that she may become the head upon the earth. …Do we feel that we should be diligent and economical,…and take that course that will make us the most independent people […]