As mentioned last time, John Taylor wasted no time after the death of Brigham Young in working to unify the Saints economically in a Zion-like fashion. Young’s efforts had failed to successfully institute the United Order a second time among the members of the church generally. In 1879, Zion’s Central Board of Trade was established by the newly sustained President of the LDS Church. President Taylor had seen the success of the Cache Valley Board of Trade and saw it as vehicle to prepare the people for voluntary economic unity.

The long-run purpose of the association was “to prepare the way for a more completely cooperative society” among the Mormon settlements. Utah historian, Edward Tullidge, reported that the movement promised to overcome the ever-present conflict between Capital and Labor by creating manufacturing and marketing cooperatives. This view was echoed by the editor of the Deseret News at the time, “Here is the grandest opportunity for the building up of a self-sustaining, industrial and powerful system of cooperative effort ever offered in the history of the world…. What is needed? Practical cooperation. Union of capital and labor, mutual interest between consumer and producer.”

The Board’s incorporation papers offer a long list of goals for the association which include: to help get imported goods into the hands of consumers as cheaply as possible; to quickly resolve business disputes; to encourage manufacturing; to seek markets for homemade products; and, “to foster capital and protect labor, uniting them as friends rather than dividing them as enemies.” 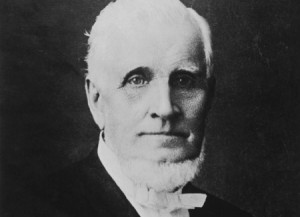 The Central Board hosted a grand convention in 1881 in Salt Lake City to “develop and assist our home industries… and to utilize the natural resources of the Territory.” Nineteen industries were on the agenda led by the manufacturing of iron. The Board’s first long-term success was the creation of a buyer’s co-op (similar to today’s consumer co-ops) for importing wagons and farm tools. That venture served the people for four decades.

Church Historian Leonard J. Arrington reported that “[T]he enforcement of the Edmunds Anti-polygamy Act in 1884 and thereafter destroyed Zion’s Board of Trade. There is no alternative explanation. Board of Trade activities were not declining, but gaining momentum when ‘the raid’ started.”

Early LDS Church leaders saw cooperatives as a preparatory steppingstone to the United Orders. What if successful LDS businessmen were to work together today to revive Taylor’s “greatest achievement”?