Thoughts on Zion #53 – Newsflash: You Are Living in Babylon!

Got a BIG kick out of Tanner Gilliland‘s blog post on MillenialMormons.com.  It’s title was “NEWSFLASH: YOU ARE LIVING IN BABYLON!”  [He he he.  Love it!]

Why is this important to understand?

If we don’t realize we are living in Babylon, we will be blind to its influence on us.  Not realizing we live in Babylon blinds us from seeing that our day-to-day environment is saturated with Babylon’s values, and, more importantly, they are rubbing off on us, and, leading us in the opposite direction of Zion.

In an eye-opening General Conference talk worthy of pondering entitled, “Zion in the Midst of Babylon“, Elder David R. Stone of the Seventy makes these two points:

2. Babylon’s Values Rub Off on Us:

This point Elder Stone makes plainly, “Seduced by our culture, we often hardly recognize our idolatry, as our strings are pulled by that which is popular in the Babylonian world” and “even our friends are encouraging us to give in to the idolatry of the times.”

He also gives an example supporting this idea from ancient times:

During the days of ancient Israel, the people of the Lord were an island of the one true God, surrounded by an ocean of idolatry. The waves of that ocean crashed incessantly upon the shores of Israel. Despite the commandment to make no graven image and bow down before it, Israel seemingly could not help itself, influenced by the culture of the place and time.

He then points out that we also are strongly influenced by Babylon’s culture in which we live:

Our culture tends to determine what foods we like, how we dress, what constitutes polite behavior, what sports we should follow, what our taste in music should be, the importance of education, and our attitudes toward honesty. It also influences men as to the importance of recreation or religion, influences women about the priority of career or childbearing, and has a powerful effect on how we approach procreation and moral issues. All too often, we are like puppets on a string, as our culture determines what is “cool.”

Convinced?  I hope so. 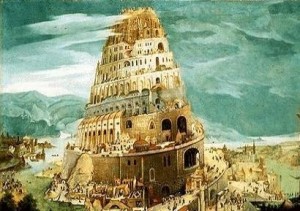 Elder Stone then makes the point that, “We can create the real Zion among us by limiting the extent to which Babylon will influence our lives.”

So, what if… what if we limited “the extent to which Babylon can influence our lives” by creating social institutions – schools, clubs, and businesses – that are saturated with Zion’s values, instead of Babylon’s? By doing so, we would also be following the divine mandate to “build Zion”. Which is just what we’re trying to do at AlpineValleyAcademy.org — a school based in mutual-respect and humility, not rigid hierarchies and pride.

Another reason to understand that we live in Babylon:

You can’t obey God’s command to flee Babylon if you don’t realize you are in it.